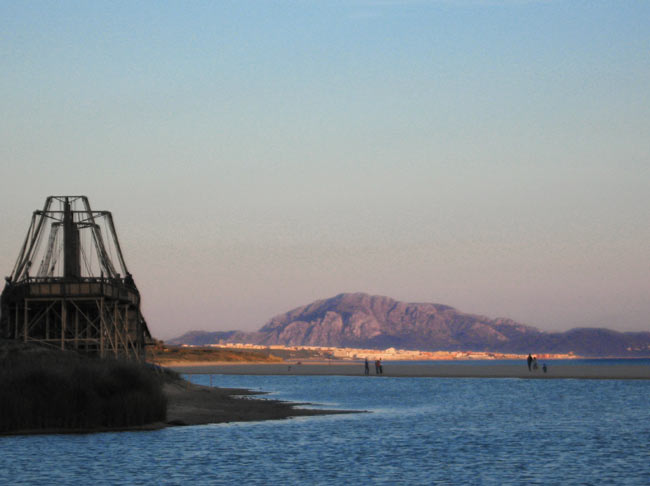 The mountain in the back belongs the African continent,the array of white houses in front of it belong to the descendants of inbred mule keepers, and of course Swiss and German sun and money lovers, those colored things are there to be ignored -better take a knive with you if you’re planning on a beach walk might spare you from some serious rope cuts- and the ‘ship’ is part of a movie set.
The last movie set I ran into was on a glacier in Austria, some four years ago.
Snowscooters driving up and down the hill for action scenes from ‘Triple X’, we were told.
Apart from the obligatory joke about the porn movie, nothing memorable.
Singing aloud ‘du bisst zo schÃ¶n von hinten’ (Stereo Total)) on the ski lift was fare more fun,
but anyway, I forget completely about that movie, until, two years later, I run into this wild Danish horse riding girl down here.
Crazy as a bat, but good company, at least on my first time visiting her in the North of Spain.
The second visit turned into a disaster but had this probability event:we watched together her favorite movie with her favorite actor,
Vin Diesel in Triple X.
That was more than a year ago, but it is only now I realize I’ve made it into Douglas Adams’s universe.
What immediately explains things as the English/Spanish teacher who comes to the cybercafÃ© to read extremely romantic lesbian love-mails in German,
or those two polite Americans who get jewelry sent to them and play music that sound like is was written in the 30’s, the very last thing you would expect to hear in a surfertown;
or those four overweighted Brits holding this competetion to use as much times as possible the word ‘cheap’ in every sentence while standing behind the fifth looking for cheap flights home on the internet.