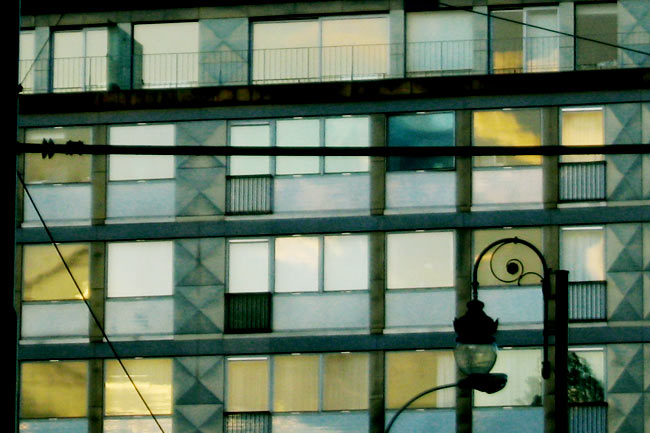 After so many decennia of doubt wether to live at the countryside or in the city
I finally set my mind on a studio and I make an appointment to visit. Let’s call it Studio1.
While visiting the immo woman tells me the neighbouring studio, Studio2, is from the same owner. It has a terrace twice as big and a window on the side. It will be for sale in the future. So I ask her to check on the price. I confirm my question by mail and with a reminder on her answering machine a few days later.
After 10 days the add for Studio1 disappears from the internet. So I try again to reach her and I do get through this time: she still has no price, but Studio1 is sold she says, a very complicated story she can’t go into now, but she’ll check on Studio2, by tonight.
15 minutes later she calls back. In that short time, reality had shifted 180Â°:
Studio2 is no more available, but Studio1 is for sale again. A reality shift that can only be explained by human drama, so enters the
‘I am divorcing with a son’ story. She wants to buy Studio2 for herself, but she can only do it if I buy Studio1 now. Because the tenant of Studio1 is leaving so the owner doesn’t want to sell just Studio2 while he would have to look for another tenant for Studio1.
To me it seems that, when she woke up that day, she was going to buy Studio1. But then she got me on the phone, the pissed off and forgotten client, and she suddenly saw me as a lever to buy Studio2 and still sell Studio1.
So, let’s talk it over, I said.
That evening we met up. And during the five beers I got my opening to choose between Studio1 and Studio2. I say her my preference goes to Studio2, but I will call her with a decision in the morning.
The next morning I get up at 6, drive over to watch the two studio’s in the morning sun. At 11h I call her with my first ever offer, on Studio1. She says: ‘no, I want to buy Studio1 myself, because it will be available earlier than Studio2. Place a bid on the other one.’ I say I have to think it over.
So far, this woman changed her mind 3 times. So an hour later I call back and tell her I stand by my offer. She says she has to think it over.
Half an hour later I sms a 1,5% higher offer, probably giving her back about half of her commission. The commission she might have dropped in dealing with the owner for herself. She sends an sms money is not the issue: she wants to have a place to live with her little son.
And five minutes later she calls me to ask me why I want so much Studio1, apparently again fishing for arguments to chase her own doubt. I don’t give her too many good reasons and tell her I haven’t seen Studio2 inside and that I am just sticking to my decision: to buy the one I have visited. On which she tells me she will communicate my offer for Studio1 to the owner.
Later that afternoon she calls me to tell me she’s buying Studio1. But I can visit Studio2 this evening and I’ll get a good price from the owner and she’ll drop something of her commission.
I told her: next week.