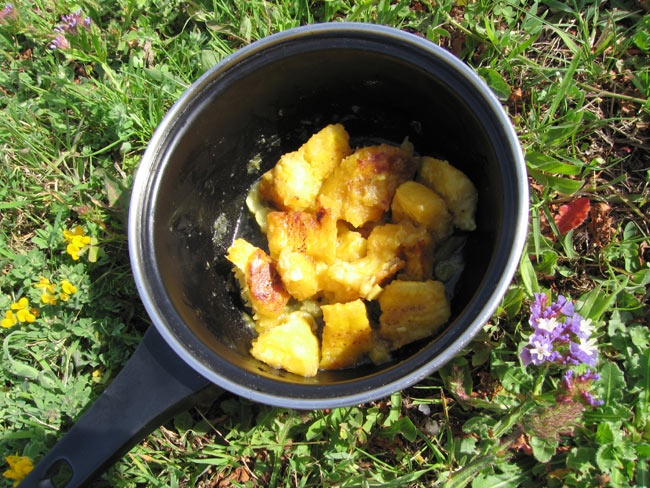 I kinda thought those big very authentic looking bananas were suspiciously cheap.
It took me one bite and a second visit to the supermarket to get the point: they were ‘para freir’, to fry.
And so I did, bathing them in olive oil, blessing them with ginger, honey and beer.
Meanwhile two shit eating bugs -a protected species- were tired of their diet and disputing some of my paleta iberica.
In Spain they don’t just think killing a bull in front of a big crowd is the coolest way to prove your courage to a girl,
the same girl you can’t fuck before marriage but once married you can beat her half or entirely to death at home,
but are also convinced they can make dried meat from black legged pigs taste like heaven.
They are entirely right about the last thing.

Today at the piscina municipal they were cutting the wild flowers,
they seem to think they are just weeds,
well, I suppose that’s how we got rid of them in Belgium.

Speaking of cutting, the stallion who got mutilated, still acts as a stallion,
and as the story goes, he might keep some semen alive in him
as long as the next six months.

So that’s about it for today,
tomorrow we’ll cook some lentejas and talk about the caterpillar,
the day after tomorrow I will return to society,
to finally get me a steady job, a loan for a house
and a not too exciting wife I’ll try to cheat upon by telling stories to young women about how interesting my life was back then.
… ah, that’s what you get from reading too much Dorothy Parker.
So I’ll return to society to write and direct my first short movie: a mini b&w musical melodrama,
Liebestraum meets Les Parapluies de Cherbourg, with bugs in it.